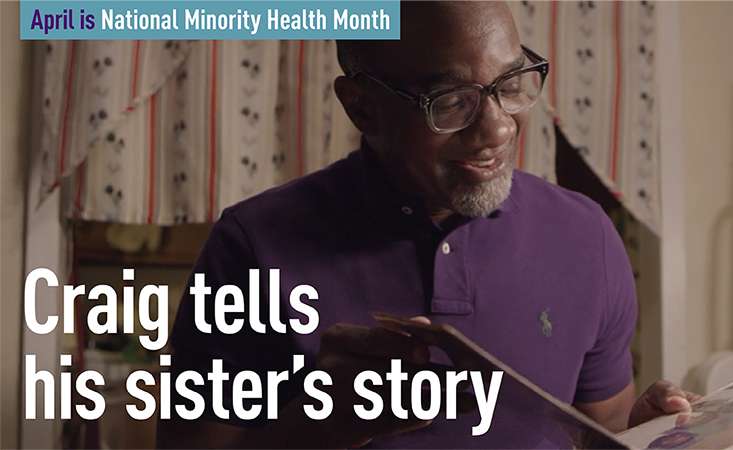 Editor’s note: Throughout April, which is Minority Health Month, we’re raising awareness of the inequalities that minority communities experience when faced with pancreatic cancer. Stay tuned for more stories taking a closer look at clinical trial safety, a study focused on genetic education and the Black and Latino/a/x communities, disparities related to the Native American community and more.

Craig Irving shares his sister’s story as often as he can, in the hopes that it helps others facing pancreatic cancer have a better outcome. He wants more people to understand the warning signs as well as have access to the full range of treatment options, including clinical trials.

It’s a chance his sister, Vi, didn’t have. After dealing with persistent back pain for over one year and a misdiagnosis of fibromyalgia, she was diagnosed with stage IV pancreatic cancer in 2013. She died just four months later.

At the time, he went online to find answers: “My sister has pancreatic cancer – what do I do?” he typed in Google. PanCAN’s PanCAN Patient Services was in the top search results.

“As an overwhelmed caregiver, PanCAN was a lifesaver for me,” he said. “They stepped in and gave us information about clinical trials. For anyone dealing with a pancreatic cancer diagnosis, I strongly advise them to get in touch with PanCAN Patient Services.

He’s kept that connection over the years, getting together a team of hundreds in his town of Washington, D.C., for PanCAN PurpleStride in honor of his sister. It’s now known as the “Vi Walk” to Craig and family. He finds solace in the increasing number of clinical trials and treatments available to patients, as well as the steadily improving survival rate.

As he works to raise funds and increase awareness, Craig is also passionate about educating the Black community about the risks and symptoms of pancreatic cancer – especially people in small towns and rural communities who have limited access to specialists and second opinions.

Since Black Americans experience the highest pancreatic cancer incidence rate of any racial or ethnic group in the country, it’s important outreach.

Craig wants to see healthcare institutions and organizations like PanCAN build relationships within the Black community – outreach that would help to improve the resources available to all those affected by pancreatic cancer.

“When people see themselves, you start to build trust,” he says. “There is such a need for access. People in small pockets in America deserve to be seen and heard.”

Watch a video from PanCAN and Cedars-Sinai, featuring Craig Irving, that emphasizes the importance of clinical trials in the fight against pancreatic cancer.

Access to financial resources is also important, Craig said, specifically citing the burdens a cancer diagnosis poses to single parents. There’s a ripple effect when a parent loses income or when the demands of cancer treatment interfere with childcare.

Craig said Vi was fortunate to have family members ready to help – but others face barriers that can impact their options.

“The illness is the same, the end result might be the same, but the experience is different.”

Craig is hopeful that continued targeted outreach to the Black community related to risks, symptoms and the importance of clinical trials can improve outcomes for all patients with pancreatic cancer.

“Vi knew the importance of this cause,” he said. “And she knew the work that needed to be done so that years to come, when another family gets the call that a loved one has pancreatic cancer, it doesn’t mean death – it means treatment and a cure.”