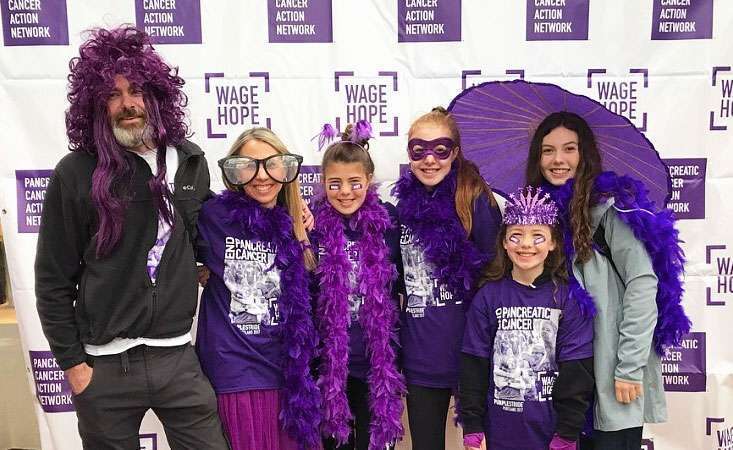 “Our kids are the most important parts of our life, and our role as fathers is our most important role, regardless of whether or not we’re sick,” said Joe Heiden, pancreatic cancer survivor and a former competitor on NBC’s “America Ninja Warrior.” “So, I focus on the positive instead of the negative and cherish the good moments I do have.”

In October 2014, Heiden was unsure of how many good moments remained after he was diagnosed with stage III pancreatic cancer. This wasn’t their family’s first experience with pancreatic cancer – Heiden’s wife, Amy, lost her father to the disease in 2013.

Heiden made a point to deal with his diagnosis with strength and optimism, not only to be able to spend more time as a father to his children but also to be an example to them of how to be accountable and persevere through life’s difficulties.

Heiden and Amy are the parents to four daughters – Sarah, 18, Sophia, 16, Sabrina, 15, and Saige, 10. Once he received his diagnosis, he knew there was no easy way to break the news to his girls. So, he decided to be upfront and let them know the severity of his disease.

“They weren’t jumping for joy, it’s pretty obvious,” he said. However, the morals instilled within Heiden’s daughters, learned through his and Amy’s actions, allowed them to find strength and support their father in his fight against pancreatic cancer.

“For me, it’s practicing what you preach,” Heiden said. “I’ve always taught them that no matter what happens in life to just do their best. I want them to see me try my best.”

Heiden’s strength comes from dealing with a similar situation during his childhood. Floyd K. Heiden, his father, was diagnosed with renal (kidney) cancer when Heiden was 13 years old and passed away 14 months later. Heiden’s father had a huge impact on his life and instilled in Heiden what he hopes he is passing down to his daughters – morals and character.

Since his diagnosis, Heiden has done everything in his power to make sure his daughters won’t experience what he had to as a child. He has climbed Mount Adams in Oregon, which stands over 12,000 feet, competed on “American Ninja Warrior,” and continues to work out regularly to help deal with the side effects associated with chemotherapy.

“If exercise were a pill, I think you’d see doctors prescribing it to all cancer patients,” Heiden said. “The more I can exercise, the better I feel.”

Shortly after his diagnosis in 2014, Heiden underwent chemotherapy in conjunction with an immunotherapy clinical trial to shrink his tumor. The treatments were successful, and seven months later, surgeons were able to remove his tumor. However, in 2015, a day after he climbed Mount Adams, his CT scan revealed his cancer had metastasized and was now in his left lung.

Heiden started chemotherapy again in October 2017. He still has issues with energy and digestion, though that’s a small price to pay for living with a disease that presents a 9 percent five-year survival rate.

“I was diagnosed over three years ago and thought I only had three months to live, and here we are over three and a half years later and I’m still alive.”

With the time that has been afforded to him, Heiden has taken advantage of each moment and focuses on what’s most important to him – his family.

“Even when I was healthy, I never knew how much time I had and I always valued time with my kids above anything else,” Heiden said. “Remember that this moment is really all we have, so make the most of it. Make the most of each moment with your children.”