Pancreatic Cancer News  Stories of Hope  Survivors  It Starts with Someone: Yoshi Majima

It Starts with Someone: Yoshi Majima 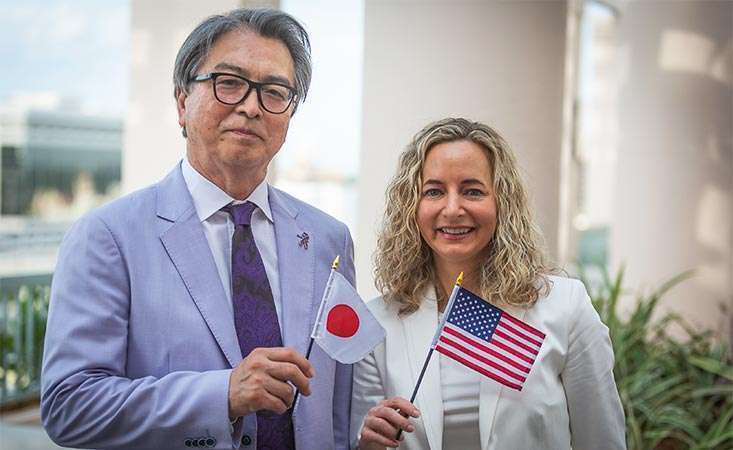 Editor’s Note: Our weekly series continues with a story about Yoshi Majima, president of PanCAN Japan. The story is accompanied by an interview conducted by Julie Fleshman, JD, MBA, president and CEO of the Pancreatic Cancer Action Network (PanCAN), in May 2018, in which Majima explains his reason for getting involved with the cause more than a decade ago.

PanCAN Japan, headed by President Yoshi Majima and based in Tokyo, was formed in 2006 as an independent extension of the Pancreatic Cancer Action Network. Like the Pancreatic Cancer Action Network, PanCAN Japan’s mission is to advance research, support patients and create hope. It does so by offering patient services as well as leading advocacy efforts to increase pancreatic cancer research funding in Japan.

“The reason I do what I do is because of my sister,” Majima said. “She was diagnosed with stage IV pancreatic cancer in the summer of 2004, and it was then that I learned about the five-year survival rate. She survived 18 months.”

Majima got information online about the disease and treatment options from PanCAN – nothing existed in Japan. He was living in California at the time, so he arranged a meeting with PanCAN’s President and CEO Julie Fleshman, JD, MBA, to discuss what could be done back home to support patients. Both were hopeful that a collaboration could help accelerate a change in patient outcomes.

“A natural first step was for me to take the Pancreatic Cancer Action Network’s patient education materials and translate them into Japanese, because my professional background included translating and selling educational materials,” he said.

Once founded, PanCAN Japan got early funding through a grant that enabled it, in conjunction with local disease specialists, to host educational seminars for patients and caregivers throughout the country. Today, the organization works with medical institutions in different regions to disseminate patient materials.

Because PanCAN Japan employs such a small team, relying primarily on volunteers, they’re only able to take calls from patients three days a week for three hours a day.

When Majima isn’t fielding patient calls, he is working to encourage the government to fund more pancreatic cancer research, bring more advocates to the cause, create a survivor program (through the Japanese version of the American Association of Cancer Research), and encourage the creation of more clinical trials. In fact, he said his proudest achievement was being instrumental in reducing the approval time for first-line pancreatic cancer drugs from five years to two.

In 2012, Majima himself had a pancreatic cancer scare when physicians discovered stage 0 carcinoma in situ through a CT scan.

“I had learned about familial pancreatic cancer when I was looking at research happening at Johns Hopkins,” Majima said. “I realized maybe I was at high risk. I was under close observation for four years when they found something on my pancreas.”

He had his pancreas removed. Majima believes that the disease was found at an earlier stage because he knew he was potentially at a higher risk.

Majima continues to raise much-needed awareness for risk factors and symptoms and takes advantage of every opportunity to tell others fighting the disease that there is hope, to never give up and to take advantage of the support of others.

“Although I’m in Tokyo,” he said, “I always feel the support of the PanCAN community.”