Donors  Stories of Hope  You Can’t Spell ‘Mother’ Without ‘Hero’

You Can’t Spell ‘Mother’ Without ‘Hero’ 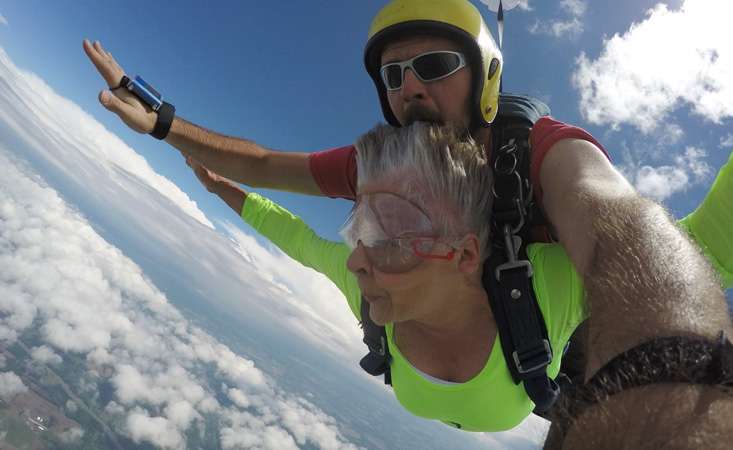 Eric Yetman’s mom, Carmen, skydiving for her 75th birthday – a gift to herself.

Editor’s note: Throughout November, Pancreatic Cancer Awareness Month, we’re discussing testing – biomarker and genetic testing – as part of our focus on “Talk. Test. Take Control. Three simple steps that could save your life.” Today, PanCAN donor Eric Yetman shares his story about his mother’s commitment to having genetic testing done after her pancreatic cancer diagnosis.

I recall having an assignment in grade school to write an essay on your hero. For me, it was an easy assignment: I idolized my father and wanted to be just like him when I grew up. Now that I am an adult, if I were given that assignment, I’d find it just as easy to write about my mother. Not that I love my father any less – not at all. Now that I am older, I appreciate all the sacrifices my mother made over the years in the spirit of making life better for her children.

Here is the story of one of those sacrifices.

In late 2019/early 2020 (pre-COVID), my mom was having problems controlling her blood sugar. She had been to a nutritionist to work on her diet and was seeing an endocrinologist in hopes of getting the situation under control. During this time, she was also in the process of finding a new primary care provider. Then the COVID shutdown hit. By the spring of 2020, she was taking regular blood sugar readings, the doctors were adjusting her medications, and we thought progress was being made and that she was getting the blood sugar problem under control.

In early September 2020, I had to bring my mom to an imaging appointment. Through a telehealth visit, she had been diagnosed with GERD (gastroesophageal reflux disease) and it was believed this was a result of the diabetes meds and the adjustments that had been made earlier in the year. However, just to be sure, the physician’s assistant ordered a scan to rule out any other issue.

I’ll never forget the worried look on my mom’s face when she came out of the exam room. She told me she saw the imaging tech write something in her chart and when she asked what the problem was, the tech replied, “The doctor will call you with the results.”

When we got back to her house there was a message waiting, saying she had been scheduled for a CT scan the following day. At that moment she knew.

She turned to me and said, “I have pancreatic cancer.”

My mother’s older sister died of pancreatic cancer in 1998.

After the CT scan the following day, things seemed to move quickly. I took her to several doctor’s appointments over the next few weeks and we received the dreaded confirmation of pancreatic cancer on October 19, 2020.

When we met with the oncologist, Mom explained her family history and made it clear that she wanted a genetic test done for the sake of her children and grandchildren. The oncologist set up the appointment to have the blood drawn later that week. 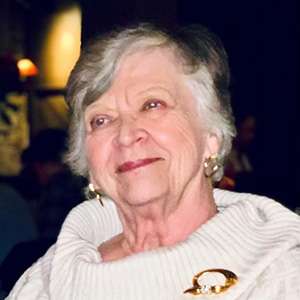 The blood was drawn, and we waited patiently for the results. In the meantime, she made it through one chemo appointment before ending up being admitted to the hospital for nearly three weeks. During that time, because of COVID restrictions, she wasn’t allowed to have any visitors. When she was discharged and placed under hospice care at home, my wife and I moved in with her to care for her.

My sister and her family came down on Thanksgiving and we made the best of the holiday. Although Mom couldn’t enjoy the spread my sister put out, she enjoyed spending time with her three grandsons. Later that night when things quieted down, I jumped on the computer and began to comb through the records that were posted on her MyChart.

While looking through her chart, I came across something from the lab regarding her genetic test. It read, “A peripheral blood sample was sent to [lab] for analysis. [The lab] followed up with [the oncologist] to obtain required patient information. The testing was cancelled as the information was not received after repeated attempts. If test is still desired, a re-draw will be needed.”

I had spent some time trying to convince Mom to go to a comprehensive cancer treatment center in Western New York between September and before her November stay in the hospital. But not wanting to burden me with making the trip, she quietly declined my repeated offers.

After reading the lab report, she grabbed me by the arm, looked me directly in the eye, and demanded to get an appointment there.

I spent the next few days making phone calls and sending emails and was able to get her in on December 7. That morning we loaded up in the car and made the trip to Buffalo. Mom slept the whole way there, and through most of the admissions process. When we checked in at the clinic, they took her vitals. Things weren’t looking good.

The doctor we had the appointment with took me aside in the hallway and told me he was surprised she was able to make the trip. He cautioned me that she would not likely make the trip home. He asked me, matter-of-factly, what we hoped to accomplish at this visit.

I explained the family history and the recent attempted genetic test and asked what they could do. Within an hour a blood sample was drawn, and a genetic counselor had called.

Mom was admitted that morning and the doctor was right, she wouldn’t make the trip home. She passed away peacefully around 10 p.m.

A couple of weeks later the genetic counselor called me with the results. She thoroughly explained what was tested and what the limitations of the testing are.

The summary of the testing reads, “NEGATIVE: No clinically significant variants found.”

Complete the family history worksheet to better understand the history of cancer in your family and use it to talk to your doctor or genetic counselor about whether testing is right for you.

I shared the news with my sister, and I could feel her relief through the phone. Seeing what my aunt’s family had gone through in 1998 and through our own experience with pancreatic cancer I take comfort in knowing the results of mom’s genetic test.

For the many personal sacrifices she made, and especially the drive to draw blood for a genetic test, I’m proud to call my mother my hero.