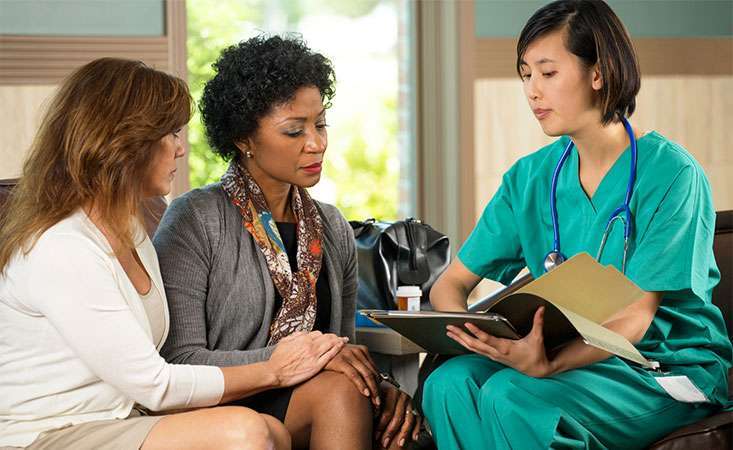 A pancreatic cancer diagnosis can lead to a lot of questions, including how to choose a healthcare team, deciding on a treatment plan and figuring out a “new normal” for the patient and their loved ones. Another key unknown is how this diagnosis can impact other family members’ risk for the disease.

New research published today in the prestigious Journal of the American Medical Association (JAMA) suggests that genetic mutations that can be inherited, known as germline mutations, are more prevalent than previously thought – and can occur at a similar rate in people with pancreatic cancer who do or do not have a family history of the disease.

One of the lead researchers is Gloria Petersen, PhD, of the Mayo Clinic. Petersen received an Early Detection Targeted Grant from the Pancreatic Cancer Action Network (PanCAN) last year and is a longstanding member of the organization’s Scientific and Medical Advisory Board. She also participated in an elite scientific panel at Pancreatic Cancer Advocacy Day earlier this week.

The JAMA study analyzed 21 cancer predisposition genes in more than 3,000 pancreatic cancer patients, gathered from October 2000 to March 2016. The patients’ DNA was compared to previously accumulated genetic data from more than 123,000 healthy individuals.

The research team identified six genes associated with pancreatic cancer risk and found that 5.5 percent of patients had an alteration in at least one of the genes. Among patients with a known family history of pancreatic cancer, 7.9 percent had a germline mutation. Surprisingly, 5.2 percent of patients without any family history were found to have at least one potentially heritable alteration, too.

“This study could change the practice of pancreatic cancer and has broad implications not only for patients, but for their families,” said Lynn Matrisian, PhD, MBA, chief science officer at PanCAN, who was not involved in the study. “The findings suggest all people diagnosed with pancreatic cancer should have genetic testing, not just patients with a personal or family history of cancer, because it’s more common to have a genetic alteration than originally thought.”

If genetic testing were to reveal a germline mutation in the pancreatic cancer patient, then their loved ones could consider getting tested as well. Those who carry the mutation would be encouraged to consult with a genetic counselor and determine their eligibility for a pancreatic cancer screening program.

It’s important to note that carriers of a genetic alteration are considered at higher risk than the general population, but this does not mean that they’ll definitely develop the disease.

The genes found to be associated with pancreatic cancer susceptibility were CDKN2A, TP53, MLH1, BRCA2, ATM and BRCA1. In addition to increasing the risk for pancreatic cancer (as well as several other cancer types), the presence of BRCA1 or BRCA2 mutations in a tumor has been found to predict response to certain treatments.

Utilizing the biological characteristics, or molecular profile, of a patient’s tumor to determine the best treatment options is known as precision medicine.

“We strongly recommend all pancreatic cancer patients to undergo molecular profiling of their tumor, so adding germline testing can enhance the information gathered about that patient’s disease, their treatment options and how their relatives may be affected as well,” Matrisian said.

Contact Patient Central with any questions about this study, genetic testing, screening programs or any other topics related to the diagnosis and treatment of pancreatic cancer.
Share  Tweet
More on:
You may also be interested in...