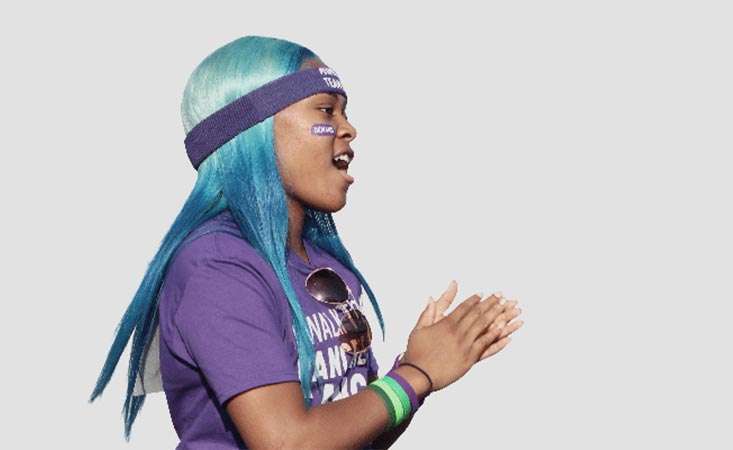 MANHATTAN BEACH, Calif. – (Nov. 7, 2019) – The Pancreatic Cancer Action Network (PanCAN) announced today the official launch of its Pancreatic Cancer Awareness Month campaign, running throughout the month of November. This year, PanCAN is encouraging the nation to get involved in its urgent fight against the world’s toughest cancer through a series of Public Service Announcements (PSAs). The PSAs by PanCAN use storytelling to highlight multiple survivor and caregiver stories – helping spread information and awareness on the risks and symptoms of pancreatic cancer – furthering PanCAN’s mission to improve patient outcomes. Featuring a number of recognizable individuals who have been directly affected by the third deadliest cancer, the PSA videos, which will roll out weekly, emphasize the importance of self-advocacy and early diagnosis. The campaign will also encourage people to wear purple (pancreatic cancer’s color) to help raise awareness and support critical research by donating to pancan.org.

The PSA campaign, which will be highlighted on PanCAN’s November Awareness microsite, features Frankie Banali, drummer for the heavy metal band Quiet Riot who announced his stage four pancreatic cancer diagnosis in October 2019; pancreatic cancer survivor Dag Kittlaus, the Co-Founder and CEO of Siri (acquired by Apple); Craig Irving, a corporate sales manager for American Airlines and PanCAN volunteer; Adam Deal, a pancreatic cancer survivor from Mayfield Heights, Ohio and Julie Fleshman, the CEO and President of PanCAN, who lost her father to the disease 20 years ago, the same year PanCAN was founded.

“As evidenced by this campaign, pancreatic cancer doesn’t discriminate and there remains an urgent need for meaningful solutions to improve outcomes for patients,” said Fleshman. “We need the public to join us in this fight. We encourage everyone to learn the symptoms and risk factors, join a local PanCAN PurpleStride walk and become a monthly donor to support PanCAN’s mission. Each and every action you take makes a difference.”

Recent news of many other prominent individuals who have been affected by the disease include “JEOPARDY!” host Alex Trebek, Supreme Court Justice Ruth Bader Ginsberg and St. Louis Cardinals Hall of Famer Bob Gibson, which has further thrust the disease into the public eye.

Pancreatic cancer is currently the third leading cause of cancer-related deaths in the United States, and the incidence rate is increasing year-over-year. In 2019, it is expected that nearly 57,000 people will be diagnosed with pancreatic cancer in the United States, and more than 45,000 will die from the disease by year’s end. The five-year survival rate is just nine percent, making it the only major cancer with a five-year survival rate still in the single digits. Also, there are currently no screening tests or early detection methods for pancreatic cancer, and most patients are diagnosed when the disease has spread outside of the pancreas, making surgery no longer an option.

Symptoms are often vague and are generally attributed to other less serious conditions. Common symptoms of pancreatic cancer may include abdominal or mid-back pain, unexplained weight loss, jaundice, loss of appetite, nausea, changes in stool and new-onset diabetes. PanCAN urges everyone to pay attention to these signs and to speak to your doctor about pancreatic cancer if you experience one or more persistent symptoms.

Learn more about the symptoms and risk factors of pancreatic cancer and how you can take action all month, including on World Pancreatic Cancer Day (Nov. 21) by visiting pancan.org/november. Follow PanCAN on Twitter, Instagram and Facebook.