Stories of Hope  Volunteers  A Proud Granddaughter Continues to Ask, ‘What More Can I Do?’

A Proud Granddaughter Continues to Ask, ‘What More Can I Do?’ 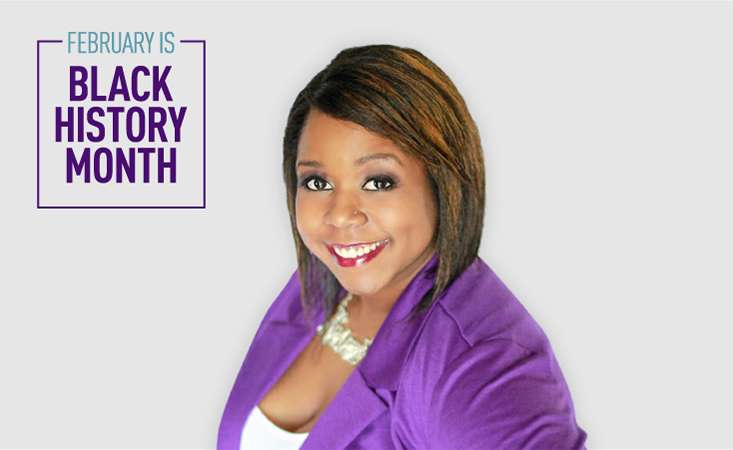 A sea of purple will surround PanCAN PurpleStride Madison team captain Niketa Miller on April 30. A community of friends, family and PanCAN supporters will have come together to take steps to end pancreatic cancer, and among all of them, Niketa will feel the presence of her grandmother. 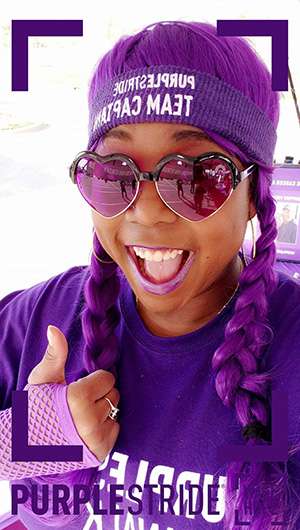 Niketa and her PurpleStride spirit

“My Lady,” she had always called her. The woman who was her best friend, her confidant, her partner in crime and the person that inspired Niketa to get involved with PanCAN well over a decade ago, in 2009. They had done everything together.

And then the family’s world shattered.

“My grandmother went to the doctor for a biopsy of her pancreas,” Niketa said. “I didn’t know why, so I looked it up online. That’s when I learned about pancreatic cancer. I learned that that’s what (actor) Michael Landon had, and that it was often terminal.

“And it was the diagnosis my grandmother got, as well.”

Niketa was immediately prompted to do something – to take action, raise awareness of the disease, raise funds for research. She found PanCAN online and called, asking, “What can I do to help my grandmother?”

A fundraiser to benefit PanCAN would help show her grandmother how much people cared about her, she decided. Niketa’s friends and family raised about $4,000 for PanCAN at their event, money that supported research and PanCAN Patient Services.

The doctor gave Niketa’s grandmother about six months to live. His prediction was accurate.

She did live to see Niketa’s fundraiser and tell her how grateful she was.

“She had the biggest grin on her face, and she knew that people cared,” Niketa said.

From there, Niketa said, “I threw myself into volunteering locally for the PanCAN Madison Affiliate.”

Over the next decade-plus, she served as Media Chair and Affiliate Chair, among other volunteer leadership roles.

“My grandmother enjoyed volunteering, so it was only fitting that I would get involved with PanCAN to help others facing pancreatic cancer – to raise awareness and be a voice for people who have passed away from the disease.” 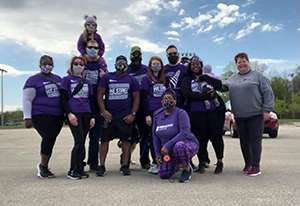 She reached out to her network of contacts and announced on Facebook that she was a PanCAN advocate and raising money for the organization. Her story inspired action.

She makes sure people know why the cause is important to her.

“I share constantly on Facebook,” she said. “I ask people to donate, share my PurpleStride fundraising page and share where our team is in the rankings of dollars raised. People like competition and are ready and willing to help you get in that top spot!”

She encourages her Junebug Express team to post often on social media, too.

“You can’t assume everyone has seen your posts, or they may be waiting on a reminder to donate. I often tell fundraisers, ‘If you don’t think you’re annoying, you’re not doing it right!’”

In 2021, Niketa took another step forward in honoring her grandmother’s memory. She created her own foundation, called Ebony Eyes Foundation. That was the nickname Niketa’s grandmother had given her, telling her she had beautiful “ebony eyes.”

Ebony Eyes Foundation raises funds and awareness for pancreatic cancer and other cancers that are also among the toughest to fight. 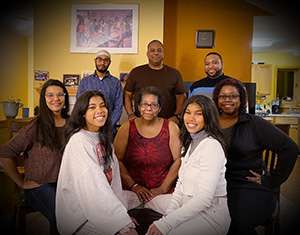 Niketa and family in a photo from a few years ago

“My grandmother was the heart of our family,” Niketa said. “When she was diagnosed, we all lost our breath. It was as if all the sound left the room. We all took on different roles, and my role was to treat helping my grandmother through cancer like it was a business.

“I took her to chemo, looked for clinical trials she might be able to enroll in, contacted various medical centers and doctors. I tried to be strong for her and strong for my family.”

Niketa promised her grandmother before she passed that she would do everything she could to give back to the cause.

Since then, in addition to her involvement with PanCAN and her foundation, she has fulfilled other promises. She graduated from college (at age 36, she adds proudly!), as well.

She takes every opportunity to talk about pancreatic cancer – the symptoms, risk factors, to contact PanCAN for free support if she hears about someone diagnosed.

When Alex Trebek was diagnosed and shared the news widely, she answered questions from friends and colleagues about the disease but she also acknowledged the news was difficult to hear. “I went through my family’s experience, emotionally, all over again,” she said.

She feels strongly that the Black community should know about the disease, pay attention to what’s going on in their bodies, and advocate for themselves. Get a second opinion, she urges. Her grandmother’s doctor had noticed a spike in her blood sugar but shrugged it off as diabetes, saying, “Black people get diabetes – everything is fine.”

But Niketa feels that diabetes could have been a symptom of her grandmother’s pancreatic cancer.

When she was diagnosed, the five-year survival rate was 5%. Today it is 11%. Impressive to her, Niketa said.

The Ebony Eyes Foundation is a premier sponsor of PanCAN PurpleStride Madison this year. Niketa is proud.

“When you get the diagnosis of pancreatic cancer, you don’t think anyone else is going through what you’re going through – usually because you just don’t hear that much about the disease,” Niketa said.

“My grandmother’s experience taught me so much. I learned a lot about who I am as a person, and the influence that I can have on others. I want people to join me in taking action. To participate in PurpleStride and see that there is a whole community of people out there supporting each other. I think you’ll be inspired to ask yourself, ‘What more can I do?’”

We need your support! Register and fundraise for a PanCAN PurpleStride on One Big Day – April 30, 2022.
Share  Tweet
More on:
You may also be interested in...