13-Year Pancreatic Cancer Survivor at State of the Union 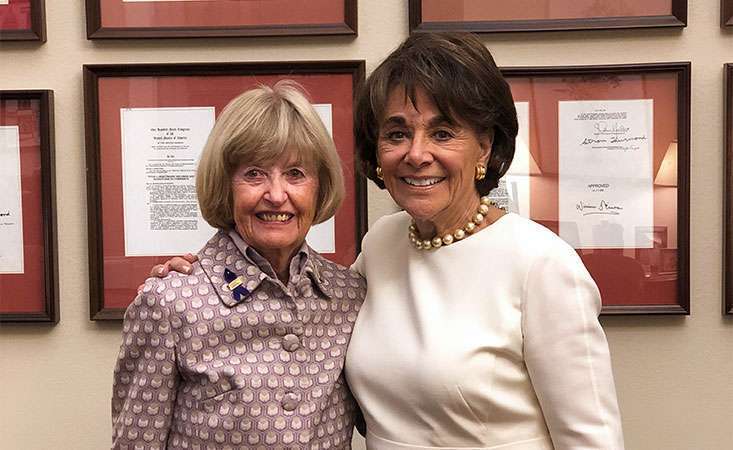 Editor’s note: All week long, leading up to Valentine’s Day, we’re sharing stories of inspiration and special connections made through the Pancreatic Cancer Action Network. Come back for a new story each day.

Throughout Diane Borrison’s more than 10 years as a volunteer with the Pancreatic Cancer Action Network (PanCAN), she’s connected with pancreatic cancer survivors and fellow volunteers coast-to-coast, inspired many of her friends and family to fundraise for and attend PanCAN’s PurpleStride walks, and participated in local support groups to offer encouraging words.

A connection that Borrison is especially proud to have made through PanCAN is with her San Jose-area members of Congress, including U.S. Rep. Anna Eshoo (D-CA).

As a longtime advocacy volunteer for the PanCAN Silicon Valley Affiliate, Borrison has been to PanCAN’s Pancreatic Cancer Advocacy Day in Washington, D.C., for 11 straight years to discuss the vital importance of more research funding for pancreatic cancer. 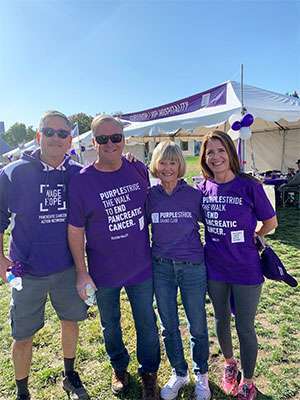 This is personal to Borrison: She is a 13-year pancreatic cancer survivor.

And she feels that when Congressional leaders are supportive of pancreatic cancer research funding, they are saving lives.

All of this advocating is critical because 80% of pancreatic cancer research funding in the United States comes from the federal government.

In December, Borrison sent a Christmas card to Eshoo’s office. The photo on the card was of Borrison’s family at PurpleStride Silicon Valley. She thanked Eshoo for standing up for pancreatic cancer patients and supporting PanCAN’s advocacy efforts over the years.

When Borrison received an email from Eshoo’s office in late January, she wasn’t surprised.

Until she opened it. She couldn’t believe her eyes.

The email was an invitation from Eshoo to Borrison to attend the Feb. 4 State of the Union address in Washington, D.C.

“I was dumbfounded,” Borrison said. “My first thought was, ‘Oh my gosh!’ And then, ‘Can I really make this happen?’”

“It was a huge honor to be invited and to be her guest,” she said after returning home last week – still on a Capitol Hill-high.

A highlight was the reception prior to the event in the office of the Speaker of the House, where Eshoo introduced Borrison to many of her colleagues.

“This is my guest Diane, and she is a 13-year pancreatic cancer survivor,” Eshoo told those gathered.

People are always amazed when they meet someone who has survived pancreatic cancer 13 years, Borrison said.

“It was great to tell those to whom I was introduced, ‘Thank you for supporting pancreatic cancer research so that more people get to survive this disease longer.’”

Pancreatic cancer has personally affected Eshoo – a close friend died of the disease. And she’s worked to champion a better future for patients in the halls of Congress. 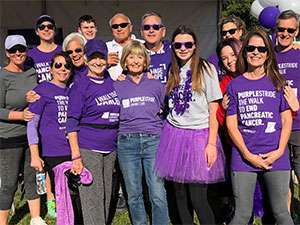 Today Eshoo is co-chair of the Deadliest Cancers Caucus as well as the Health Subcommittee of the U.S. Energy and Commerce Committee, working to ensure that biomedical research and development maintain funding.

Eshoo was also a co-sponsor of the Recalcitrant Cancer Research Act that became law (Borrison and hundreds of other PanCAN advocates worked tirelessly to ensure their voices were heard regarding the importance of the bill for pancreatic cancer).

More recently, Eshoo led congressional efforts to ensure pancreatic cancer got its own dedicated research program for $6 million through the Department of Defense’s Congressionally Directed Medical Research Program. Eshoo worked at every step of the way to deliver this win for patients.

Her recent newsletter to her constituents showcased a portion of Borrison’s story and her advocacy efforts on behalf of PanCAN, saying:

“Diane has not wasted a moment since her cancer went into remission. She travels to Washington, D.C., with the Pancreatic Cancer Action Network (PanCAN) every year to advocate for federal investment in cancer research, and she was instrumental in advancing the Recalcitrant Cancer Research Act.”

Before she leaves, as she does every year just prior to heading to the event, she will send a personal note to the offices of her members of Congress.

“I’m coming to D.C., and I’m really looking forward to seeing you!” she will write.

Until then, she will keep making connections through her PanCAN family, and bringing her own network into the fold.

“Half my friends are now involved in this cause,” she said.