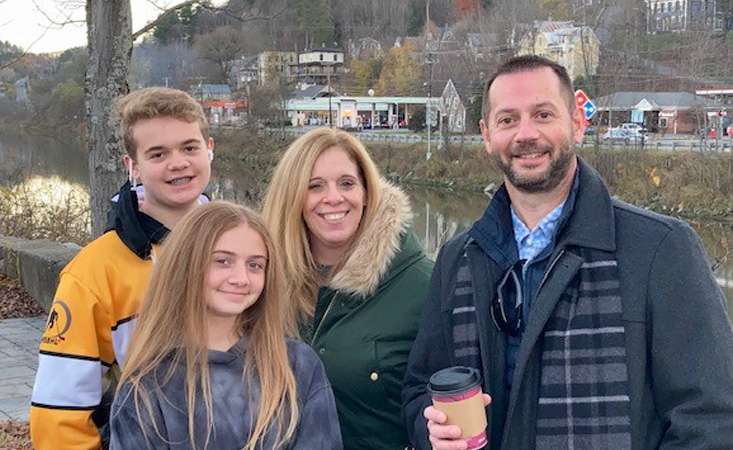 Editor’s note: PanCAN volunteer and Survivor Council co-chair Nick Pifani, a PanCAN Ambassador, shares his story about being one of several in his family who has faced pancreatic cancer.

Three of us have been diagnosed with pancreatic cancer in the past four years.

And I was diagnosed a month after my cousin, in March 2017.

I hadn’t been feeling well for a while. I was having digestive issues every time I ate, and relentless back pain. I had an appointment set up for some tests, but it was soon clear that I couldn’t wait another month. One day my wife and I decided I should go to the Emergency Room. I told her to go on to work and that I would get the kids on the bus and then go to the hospital. After a few tests and a CT scan, the doctor walked into my room and turned off the TV. I knew then that things were not good.

The next day, an MRI confirmed the ER doctor’s suspicion, and I got the diagnosis of pancreatic cancer.

Knowing my family history of the disease, at my first oncology appointment, I said to the doctor, “I think we need to do genetic testing – I want to know if there is a genetic link.”

My oncologist agreed, saying, “Absolutely, and we also want to do biomarker testing to see if it could lead to other treatment options for you.” 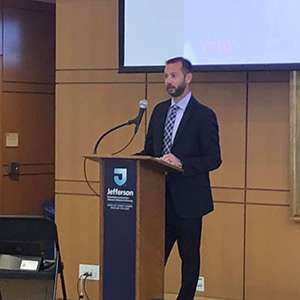 Through testing, we found out that I have a PALB2 mutation – that stands for partner and localizer of BRCA2. My oncologist described it saying that if you were looking at a genetic tree, PALB2 would be like a cousin to the BRCA2 gene. We learned when my dad also had genetic testing that the PALB2 gene is present on his side of the family.

The information that we learned through genetic and biomarker testing influenced my oncologist’s treatment approach.

At the time of my diagnosis, FOLFIRINOX (a platinum-based chemotherapy) was not the standard of care for pancreatic cancer like it is now. But my oncologist chose that treatment for me because he felt that the PALB2 gene would respond best to it, and indeed, it worked. My tumors shrunk and I was able to have the Whipple procedure.

I don’t think I would be here to talk to you today without testing, which indicated my oncologist was on the right track with the treatment we chose.

That’s the hardest part for me, that my cousin didn’t make it but I have lived – and in part because I had more information about my tumor, and more quickly, than she had about hers. Without testing, I may have gotten standard of care treatment, too.

My family’s experience with cancer is one reason that I do what I do as a volunteer and advocate for PanCAN. Because my cousin’s voice – and the voices of all those lost – always has to matter.

I run every day. I was a competitive runner in high school and before that, I had won nationals competitions at 13 years old.  But in my senior year of high school, I got injured and stopped running. I had gotten out of shape by the time my mom was fighting colon cancer years later. One day I was leaving hospice after visiting her and as I was riding the elevator down, I thought, “I’m going to run a marathon for my mom.” I did, and I haven’t stopped running since (minus the six weeks I took off after my Whipple surgery). Next year I’ll run a couple of half marathons. 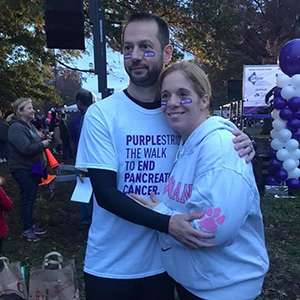 Running led me to PanCAN.

I saw a PanCAN PurpleStride Philadelphia advertisement and wanted to participate – mainly to prove to myself and others that I could do a 5K. During chemo sessions, I would blog about my training to run in PurpleStride. Bruce Platt, a local volunteer and longtime PanCAN supporter, saw my blog, reached out and sent me a gift bag after chemo. Through PurpleStride and Bruce, as well as Philadelphia PanCAN volunteer Jim Lajeunesse, I learned about all the great things PanCAN does for patients and families.

I decided during treatment that if I made it to the other side, I wanted to be the person who got involved. I want a world with more good outcomes for pancreatic cancer like the outcome I’ve had, and you don’t get there by doing nothing.

I remember my dad saying when I was diagnosed, “You were always a kid who loved a challenge – you loved being told you couldn’t do something – it’s part of your DNA.”

Besides being a PanCAN volunteer and Survivor Council member, I talk to about eight to 10 people a month who find me and reach out because they are fighting pancreatic cancer and want to hear that there are survivors. I give the PanCAN Patient Services phone number to every single one of them. I tell them, “The one regret I have is that I didn’t know about PanCAN. I had to work a lot harder to find answers and with pancreatic cancer, time is usually not your friend. Things would have been a lot less stressful for me if I had known about PanCAN.”

I enjoy being a resource for other people going through this – to show them there is hope.

I spoke to someone newly diagnosed recently and told them, “It’s a crappy hand of cards you got dealt, but I’ll tell you what I told my kids who were 6 and 8 when I was diagnosed: Life’s not fair but you know how many people win poker with a crappy hand of cards? A lot. It’s about how you play that hand. You’ll have bad days and that’s OK – that’s human and that’s life. But otherwise, you’ve got to be ready to go and play your hand.”

The worst thing a person can do when they get this diagnosis is to go on the internet and read the horror stories – that’s part of why we created our PanCAN survivor’s video – to reverse the trend.

I want people to know that a diagnosis is not the end – it’s the beginning.

Contact PanCAN Patient Services to learn more about pancreatic cancer, testing, treatment options and other resources and services, all free of charge.
Thank you to our leading Pancreatic Cancer Awareness Month Sponsor