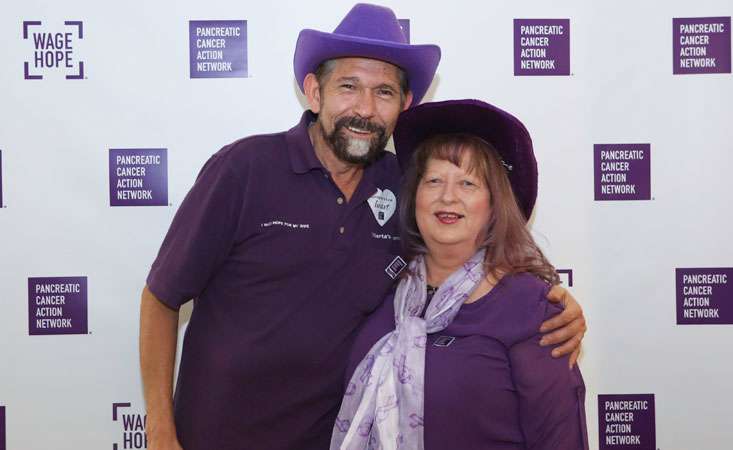 Roberta and Vic Luna, volunteers with the PanCAN Orange County Affiliate in Southern California, are the kind of people you want on your team.

Since 2008, they’ve been hosting events to bring awareness and funds to pancreatic cancer. They have organized 5K walks, 10K runs, pancake breakfasts, pizza parties, 20-mile bike rides and more, including many years of hosting PanCAN PurpleStride Orange County. Sometimes they have hosted 25 to 30 events in any given year. Supporting people who are fighting pancreatic cancer is their top priority.

Roberta lost her grandmother, father, uncle, and mother to pancreatic cancer. After the disease took so many people she loved, she knew she had to get involved with PanCAN, and Vic has been at her side every step of the way.

As a “purple power couple,” they have attended many events raising funds and awareness of pancreatic cancer in both Orange County and Los Angeles, as well as advocating during PanCAN’s Action Week in Washington, D.C.

But it wasn’t until years after they got involved with PanCAN that anyone knew the whole story. At PanCAN’s “An Evening with the Stars” fundraising gala one year, Vic nudged Roberta when the host asked all of the pancreatic cancer survivors in the room to stand and be recognized. No one knew that she, too, was a survivor. 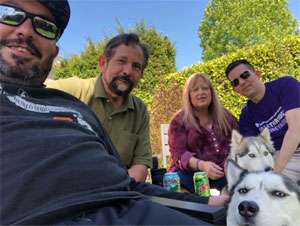 And fight they did. Thankfully, Roberta and Vic have a team of friends, family and coworkers always in their corner, including the 45 staff members at the company Vic co-owns. Every Monday, they wear purple in support of the cause. The Luna’s “purple people” show them that they’re never in this fight alone.

While Roberta serves as Mission Chair and Vic as PurpleStride Orange County Chair (volunteer leadership roles) for the PanCAN Orange County Affiliate, they are also generous PanCAN donors and they are leaving a gift in their will to PanCAN.

Every Thursday at 11 a.m. PT, they host “Living Hope,” a live 30-minute radio show and podcast to talk about the disease. They interview survivors, caregivers, researchers, doctors, volunteers, and anyone impacted.

“It brings it down to a personal level to tell people’s stories of what they’re going through,” Vic said. “Often we lose a loved one, and maybe it gets talked about, maybe it doesn’t. ‘Living Hope’ allows people to tell their own stories. It allows their loved one to be more than a number, more than a statistic. Because every story is important, and we need to hear them.”

2019 skydive in memory of Lupe Romero

Eight years ago, Roberta and Vic were at a PanCAN event when they ran into Lupe Romero, who had pancreatic cancer. When Lupe told Vic she wanted to go skydiving, his first reaction was, “Please don’t tell my wife.” Within the hour, Roberta and Lupe had plans to make Roberta’s survivorship anniversary one to remember.

“Being diagnosed taught me to stop putting things off for the perfect time,” Roberta said. “There is no perfect time. There’s just today.”

Since that day, they have jumped eight times. Lupe was always there with them until she passed away in 2018.

Each year Roberta and Vic invite one new survivor and one person who has never jumped before to join them. In 2019, they had so many people in their corner that they required two planes. They honor all those who have lost their fight to pancreatic cancer by wearing T-shirts with the names of more than 200 loved ones and others they have met along the way.

The Luna’s jump – celebratory and somber at the same time – is a reminder that if they can jump out of an airplane, they can handle anything pancreatic cancer throws their way.

We are grateful to Roberta and Vic for all that they do for pancreatic cancer. They are making a huge difference.

Get involved in your community and support pancreatic cancer patients and families who need PanCAN support.