As New Congress Determines Their Priorities, Make Yours Heard 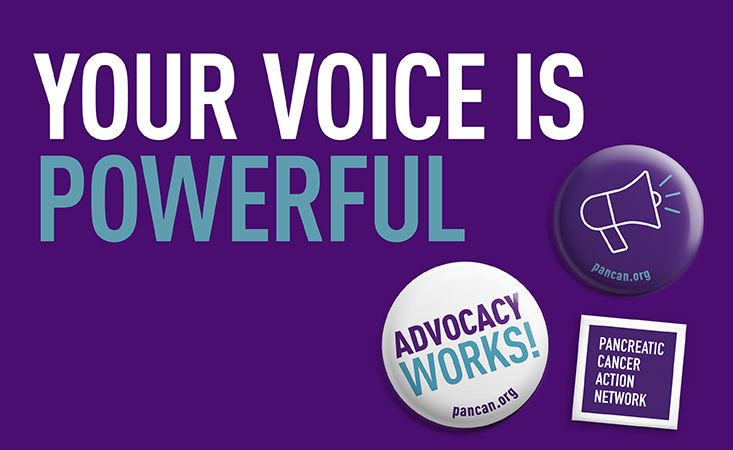 The Pancreatic Cancer Action Network (PanCAN) works year-round to ensure that federal funding for pancreatic cancer research stays top-of-mind. And supporters like you have raised your voices to make sure Congress knows it’s not just a few – it’s thousands of purple people who have been affected. That gets Congress’s attention, and they know it’s important for them to fund research for this disease each year.

This year, PanCAN is urging Congress to:

We’re also asking members of Congress to join the Congressional Caucus on Deadliest Cancers to support the community and raise awareness in Congress for the cancers taking the most American lives.

Send a message to let Congress know this is important to you, too!

In 2019, thanks to your advocacy efforts, Congress created a dedicated Pancreatic Cancer Research Program at the DoD. It provided $6 million in federal funding specifically for pancreatic cancer research and is focused on innovative, high-impact research to speed discoveries of new treatments and early detection strategies.

Last year – again thanks to your advocacy – Congress increased funding for that program to $15 million!

But we can’t stop there. We need Congress to continue funding this program and increase these dedicated research dollars, which is why this year we’re asking for $20 million for pancreatic cancer specific research.

Research Funding Through the NIH and NCI

Congress invests billions of dollars in biomedical research each year through the NIH and NCI. The NIH and NCI play an important role in funding research at universities and academic institutions across the United States – and the NIH is the single largest source of pancreatic cancer research.

Alongside other cancer organizations and advocates, we’re asking for increased funding to these agencies this year to support all types of cancer research – which, in turn, boosts pancreatic cancer research funding.

The pancreatic cancer research portfolios at the DoD and NCI complement each other and are not duplicative. The NCI focuses on basic, translational research, while the DoD focuses on high-impact, high-reward research. Both are critical for a disease with no early detection method and not enough effective treatment options.

The Deadliest Cancers Caucus is open to all members of Congress. Members of the Caucus raise awareness of and advocate for research funding and other measures to increase survival rates for the deadliest cancers. These are the cancers with a five-year survival rate of less than 50% – including pancreatic cancer.

Your Voice Makes All the Difference

Last year alone, PanCAN’s advocates sent 42,700 messages and reached all 535 members of Congress. And your voice made a difference.

Increased funding for pancreatic cancer research will lead to more scientists focused on the disease as well as new and better ways to detect, treat and prevent it.

We’re Hard at Work – and Need Your Help

Fleshman has met with our congressional champions to ensure they are ready to prioritize pancreatic cancer research funding.

And advocates across the country are meeting with their new members of Congress as well as those who are new to committees that determine cancer research funding.

We also need your collective voices to show Congress that there are thousands of their constituents who want them to prioritize pancreatic cancer research – before key decisions are made for next year’s budget.

Take two minutes to let Congress know that pancreatic cancer research is a priority. Send a message to your members of Congress today.
Share  Tweet
More on:
You may also be interested in...