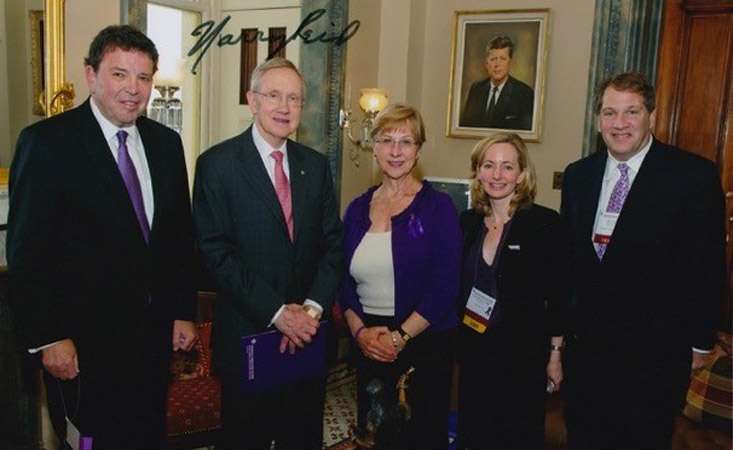 Sen. Harry Reid (D-Nev.) flanked by PanCAN advocates from Nevada Stu and Ginnie Jed, along with Julie Fleshman, president and CEO of PanCAN, and Peter Kovler, former PanCAN Board Chair.

He made headlines both when he was diagnosed and again after reports that he was participating in an immunotherapy experimental treatment in July 2020.

Sen. Reid retired from Congress at the end of his term in 2017. During his time in the Senate, long prior to his diagnosis, he was a staunch supporter of increased research funding for pancreatic cancer. He participated in numerous meetings with PanCAN staff and volunteer advocates from Nevada, both in Washington, D.C., and in his state’s local office, to discuss the need for pancreatic cancer research to be a national priority.

He signed on to support the Recalcitrant Cancer Research Act, which called upon the National Cancer Institute (NCI) to develop a strategic plan for cancers with survival rates under 50% – starting with pancreatic and lung. The Act was signed into law in 2013 and was instrumental in bringing national attention to the disease.

PanCAN’s strategy on Capitol Hill has always been to increase federal funding for pancreatic cancer – and as a result of the Act, the NCI announced new research funding opportunities. Their investment continues to increase.

PanCAN and its thousands of advocates continue to push for progress for pancreatic cancer patients through their work with members of Congress from all 50 states.

Donate today to ensure PanCAN and its advocates can continue to urge Congress to increase federal research funding for pancreatic cancer.

Throughout my time in Congress, I learned much from advocates who traveled to Washington, D.C., to share their experiences with me. @PanCAN's members were always effective in raising awareness about the disease and helping me understand where we needed to do more. https://t.co/TO9t6UGzQ6

The same unified voices led Congress to create that program in 2019, the first-ever dedicated to pancreatic cancer, and provide $6 million.

Later in the summer, after PanCAN’s Advocacy Week, the U.S. House of Representatives passed a DoD spending bill that included $15 million for the Pancreatic Cancer Research Program. (The House added $5 million to the funding bill in tribute to U.S. Rep. John Lewis (D-Ga.), who died of pancreatic cancer.)

This year, we’re urging Congress to invest $20 million for the program to help provide more opportunities for research to improve outcomes for pancreatic cancer patients.

Send a message to your members of Congress to let them know that this is an issue that’s important to you.

Pancreatic cancer is the third leading cause of cancer-related death in the United States and has a five-year survival rate of 10%.

PanCAN President and CEO Julie Fleshman, JD, MBA, said, “We are tremendously saddened to hear the news of the passing of Harry Reid from pancreatic cancer. This is a tough disease with vague symptoms and is often diagnosed too late when tumors are inoperable. PanCAN will continue efforts to improve patient outcomes by investing in research to find an early detection strategy and more effective treatment options.” 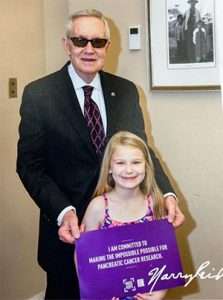 She added that because Sen. Reid publicly announced his pancreatic cancer diagnosis, more awareness had been raised about an extremely challenging disease.

People facing pancreatic cancer are encouraged to contact PanCAN Patient Services and connect with a highly trained and compassionate case manager who can provide free, personalized information about the disease, including treatment options and support services.

PanCAN is grateful for Sen. Reid’s long-time support of the pancreatic cancer cause. Our heartfelt condolences go to his family during this time.

Donate to PanCAN and ensure continued bold action to improve the lives of everyone impacted by pancreatic cancer.