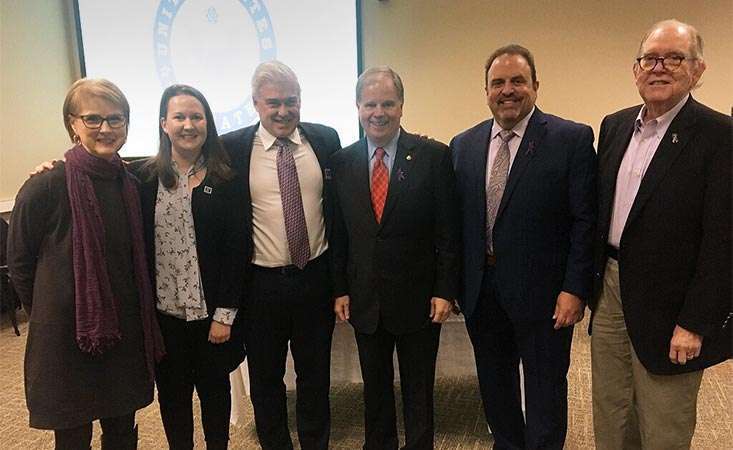 In response to the disease’s impact on his constituents in Alabama, Sen. Doug Jones (D-AL) presided over a hearing entitled, “Pancreatic Cancer: Fighting the World’s Toughest Cancer in Alabama and Nationally,” on Nov. 15, 2019.

The hearing, which took place at University of Alabama at Birmingham, featured testimony from three people who’ve lost loved ones to pancreatic cancer, as well as a healthcare professional specializing in the disease.

In Alabama – as well as all of the United States – pancreatic cancer is the third leading cause of cancer-related death, expected to kill 770 Alabamians this year. An estimated 910 people in Alabama will receive a pancreatic cancer diagnosis in 2019.

“Senator Jones, on behalf of the Pancreatic Cancer Action Network, PanCAN, I want to thank you for convening this field hearing today to highlight pancreatic cancer and the importance of federal support for pancreatic cancer research,” began Steve Cook’s testimony. Cook, a PanCAN advocate from Huntsville, Ala., lost his first wife, Marqueta, to the disease in 2018, just 12 months after her diagnosis.

Cook shared that he attended his first National Pancreatic Cancer Advocacy Day just two short weeks after Marqueta’s death. “Truth be told, I considered not going, but I knew she had wanted me to go – I am very glad I did.

“This disease can render you hopeless but taking a unified message to Capitol Hill with hundreds of others was inspiring – we all had a shared bond.” 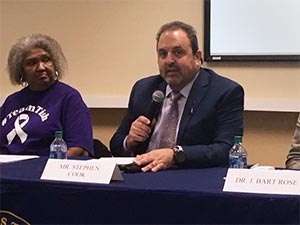 Cook went on to discuss the importance of federal funding to ensure innovative research continues in laboratories and clinics throughout the country.

“While there has been a slow increase in the federal investment in pancreatic cancer, research funding remains disproportionate to the severity of the disease,” he said.

“Along with the National Cancer Institute (NCI), the Department of Defense (DoD) is an important source of funding for cancer research. The DoD focuses on high-risk, high-reward research, an important compliment to NCI research funding and critically important for a disease like pancreatic cancer.”

PanCAN and advocates across the country have been working to build support in Congress to create a dedicated pancreatic cancer research program at the DoD for $10 million.

In his testimony, Cook explained that creating a dedicated program for pancreatic cancer will allow for much needed research designed specifically to address the needs of the disease to accelerate progress and improve treatment options.

Two other speakers at the hearing, Hillery Head and Lynette F. Nall, courageously shared how pancreatic cancer has impacted their families. Head lost her husband, who was a personal friend and campaign manager of Sen. Jones’, to pancreatic cancer in December 2018. Nall’s daughter passed away in January 2019, just a week shy of her 47th birthday.

Nall recounted the symptoms her daughter, Letisha (“Tish”) experienced over a four-month period. “She said no matter how she would lie down, she couldn’t get comfortable and had trouble sleeping. Tish had light pain in her lower back,” Nall recalled.

Three months later, “Tish’s pain got a little worse. She got extremely nauseated. The nausea was the worst I had ever seen.”

It took several visits to doctors before the source of Tish’s discomfort was revealed: stage IV pancreatic cancer. “Needless to say, there should be early detection for this disease,” Nall said.

“Tish’s first visit to the doctor should have resulted in some test that could have saved her life.”

Head described a similar reaction to her husband, Giles’, diagnosis. “Of course, we were stunned. The only reason I believed the diagnosis was that it offered an explanation of how Giles had gone from an active and vibrant 48-year-old to a jaundiced invalid in a matter of weeks.”

She concluded her powerful testimony with a plea: “Cancer doesn’t care. So, it’s up to us to care.” 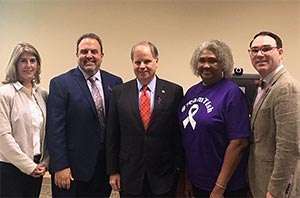 The final testimony came from J. Bart Rose, MD, MAS, director of the pancreatobiliary disease center at University of Alabama at Birmingham.

“As the majority of patients will present with pancreas cancer that cannot be [surgically] removed, we need both better treatments for advanced-stage disease and ability to detect disease at an earlier stage,” he said.

Next, Rose emphasized how important it is for patients whose disease is diagnosed in time for surgery to see surgeons with considerable experience operating on pancreatic cancer patients.

Finally, Rose asserted, “We need to address disparities within healthcare, including those within pancreatic cancer. In the Deep South, where we celebrate our diversity with a large proportion of African-Americans, this disparity is particularly relevant.

“Additional money should be made available to study and reverse these disparities.”

Meaghan Slater, PanCAN’s associate director of advocacy, was able to attend the hearing as well. “This field hearing is an exciting opportunity to raise awareness about pancreatic cancer,” she said.

“And, the timing is perfect – November is Pancreatic Cancer Awareness Month, and Congress is at work negotiating a funding package for the coming year. As Mr. Cook noted in his testimony, this isn’t a red or a blue issue – this is a purple issue.”

Slater added, “We are appreciative to Senator Jones for shining a light on this disease at this critical time, and we will continue to ensure funding for pancreatic cancer research remains a legislative priority.”

You can watch the hearing through the senator’s Facebook Live and read more from the Alabama Political Reporter.

Send a message to Congress to let them know you care deeply about medical research funding at both the NCI and the DoD.
Share  Tweet
More on:
You may also be interested in...