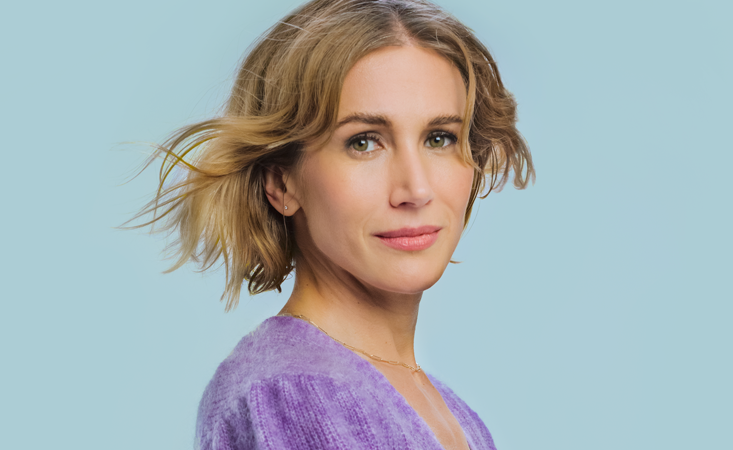 Jen Landon lost her dad to pancreatic cancer and appears in a public service announcement for PanCAN this November.

Editor’s note: We kick off Pancreatic Cancer Awareness Month with a personal story from “Yellowstone” actress and PanCAN ambassador Jen Landon as part of our “Talk. Test. Take Control.” campaign. All month we will share stories and blogs emphasizing the importance of having a conversation about genetic and biomarker testing for pancreatic cancer patients and families.

She was only 7 years old.

But Jen Landon’s memories of her dad’s pancreatic cancer diagnosis and death are still vivid today.

“It was lonely. It was a very isolating experience. Seeing my dad sick, I think that really changed me as a kid – and as an adult. You immediately grow up when you are physically stronger and more able-bodied than your parents.”

Michael Landon was adored worldwide and best known for his roles on popular TV shows like “Bonanza,” “Little House on the Prairie” and “Highway to Heaven.”

For Michael, his family and children took center stage. Jen and her brother Sean were the youngest of Michael’s nine children.

“When I think about my dad, I remember him being incredibly playful,” Jen said. “He was very interested in making things as interesting as possible for me, which is a great quality to have in a parent when you’re a kid.”

As an adult, when Jennifer began to have some health issues of her own, she made the decision to have genetic testing to see if she had a familial link to pancreatic cancer.

“It was important to me to take control of my health,” Jen said.

Jen’s test results did not show a genetic link to pancreatic cancer.

She understands that testing is a way that families can take control in the fight against pancreatic cancer, and she is helping PanCAN spread that message this November during Pancreatic Cancer Awareness Month.

“Testing is about advocating for yourself,” she said. “The more you know, the more you can take power back. And that is so important with this disease.”

A public service announcement featuring Jen focuses on this topic as part of PanCAN’s “Talk. Test. Take Control.” campaign that encourages a conversation with your doctor about genetic and tumor tissue biomarker testing if you are a pancreatic cancer patient, and genetic testing if you are a first-degree relative.

For patients with pancreatic cancer, understanding their tumor biology and genetic makeup can help identify the treatment options that may work best for them. Also, they can learn if they have inherited mutations that could impact their family’s health.

When pancreatic cancer is detected earlier, and in a more treatable stage, patients can have access to more treatment options, which can lead to better outcomes.

Michael Landon was only 54 when he died, three months after his diagnosis. He was the first public figure to announce – in April 1991 – that he was fighting pancreatic cancer.

“I was very afraid,” Jen said. “I thought everyone who had cancer died from it. My siblings were a lot older than me, so they were grieving as adults. I was grieving like a kid who thought like an adult.

“It devastated me to lose him. I especially long for the experience of knowing my dad now that I’m an adult.”

Jen has remained involved with PanCAN as an advocate alongside her mom, Cindy, and her brother Sean. The three have attended PanCAN Advocacy Day in Washington, D.C., meeting with Congress about the need for increased federal research funding for the disease.

Recently, on the 30-year anniversary of Michael’s death on July 24, 2021, Michael’s children and wife Cindy wrote tributes to him.

“Advocacy can be incredibly cathartic and a way to take power back and help prevent someone else from going through pancreatic cancer,” Jen said. “There are so many ways to advocate – and testing, if you or a loved one have been affected by pancreatic cancer, is one of the most important ways.”

Contact PanCAN Patient Services to learn more about pancreatic cancer, testing, treatment options including clinical trials, and other resources and services, all free of charge.
Thank you to our leading Pancreatic Cancer Awareness Month Sponsor