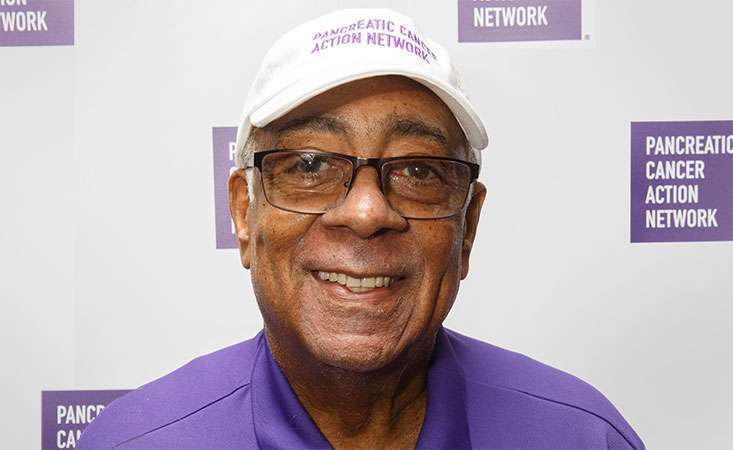 “If jumping out of a plane will help get the word out about this disease, that’s what I’ll do,” said Marchman, who will celebrate his 20th year of survival in May 2019. “Pancreatic cancer is a tough disease, but developments are being made. More people need to know and talk about this disease. There is always hope.”

Marchman works tirelessly to spark more awareness and conversation about the world’s toughest cancer. He encourages anyone facing the disease to get information, which includes contacting the Pancreatic Cancer Action Network’s (PanCAN) PanCAN Patient Services. He fundraises for PurpleStride, the walk to end pancreatic cancer. And he also participates in the annual National Pancreatic Cancer Advocacy Day, sharing his story with members of Congress to advocate for more federal research funding.

Connecting with members of the Congressional Black Caucus, Marchman also aims to increase pancreatic cancer awareness among African Americans, who are at a higher risk of getting the disease than any other racial or ethnic group.

“This will be my eighth year attending Advocacy Day,” Marchman said. “African Americans make up about 8 percent of the survivors in attendance. That’s more than we had before, but still not nearly enough.”

Since 2016, Marchman has served on PanCAN’s Survivor Council, which ensures the survivors’ voice, experience and expertise are integrated into the organization’s programs and initiatives. He greatly appreciates his term of service, which ends summer of 2019.

“I have and will continue to support the pancreatic cancer community in every way I can,” Marchman said. “And through my experience, I’ve received a great deal in return.”

Marchman made many special memories through his involvement with PanCAN, though he’s especially fond of one.

“In 2007, PanCAN was hosting its 10th anniversary of its Evening with the Stars Gala for Pancreatic Cancer Research. Since my wife and I were celebrating our 50th wedding anniversary that year, we traveled to Los Angeles to attend the special occasion.

“They sat down, but a young lady and I were still standing. ‘Julie,’ I yelled. ‘You forgot something!’ Everyone laughed. Julie asked how long our survivorships were. The young woman said, ‘six years’ and I said ‘eight, going on nine.’ It was an inspiring moment for the room.”

As he continues to raise awareness, Marchman looks forward to a future where many more long-term survivors can stand with him.

Marchman’s encouraging message for pancreatic cancer patients is: “Don’t be afraid. If you have the disease, get information. Know your treatment options, including clinical trials. Be a part of research to help scientists develop a cure.”