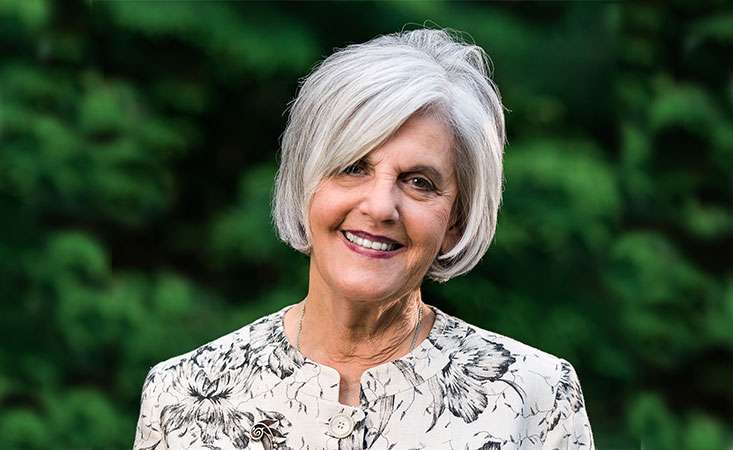 Editor’s note: In honor of the recent announcement of PanCAN’s Early Detection Initiative, we’re sharing stories that give you a look into how the initiative came about and a few of the many people who made it possible. Today, we’re sharing a story originally published last year about a now-13-year survivor, Sheila Sky Kasselman, who was an early supporter of PanCAN’s Early Detection Initiative. We are so grateful to Sheila and all of the donors who have made this initiative possible.

Sheila Sky Kasselman has experienced more than a decade’s worth of challenges, but the 12-year pancreatic cancer survivor doesn’t let that get her down.

“Every day is a new beginning,” Kasselman said. “I’m here and functional. That’s the best news.”

In 2007, Kasselman was diagnosed with stage I pancreatic cancer. Though her disease was caught at an early stage, she had been suffering for nine months before doctors found the cause.

“People don’t realize how depressed you get when you don’t know what is going on,” Kasselman shared.

“And depression is a symptom of pancreatic cancer. In fact, I had many more symptoms.”

They included nausea, weight loss, diabetes, back pain and jaundice.

When the symptoms started, her tumor was small and hidden under an artery, so the doctors couldn’t see it on a CT scan. When it grew large enough to collapse her bile duct, jaundice set in, triggering another scan.

This time, they could see the tumor.

Luckily, she was still eligible for surgery.

For eligible patients, surgery is the best option for long-term survival of pancreatic cancer.

Kasselman had chemotherapy and radiation therapy, followed by the Whipple procedure.

As a result of the treatment, she now has type 3c diabetes. This type of diabetes is caused by pancreatic diseases, like pancreatic cancer or pancreatitis, or removal of some or all of the pancreas through surgery.

Between the removal of organs during the surgery and the diabetes that followed – along with further complications due to kidney stones – Kasselman continues to have huge nutritional challenges.

Even now, more than a decade later, she remains on an extremely limited diet. She drinks a ton of water to stay hydrated and takes pancreatic enzymes with every meal, as well as vitamin D.

But Kasselman is still a force to be reckoned with.

Weighing in at only 95 pounds, she’s strong – exercising, doing Pilates and walking on a regular basis.

She has also kept her sense of humor and is committed to helping others learn about this disease.

“It is equally important for me to raise awareness and to raise funds for research.

“So many people don’t get to the doctor in time. Late diagnosis breaks my heart.”

Just four months after her Whipple surgery, Kasselman started Sky Foundation to raise awareness and fund research for the early detection and treatment of pancreatic cancer.

Sky Foundation is a member of the World Pancreatic Cancer Coalition, a global alliance in the fight against the disease.

“I think PanCAN is doing excellent work,” Kasselman said. “I have the utmost respect for everything that PanCAN does.”

She is particularly excited about the new dedicated federal pancreatic cancer research program – and credits PanCAN’s advocacy efforts for that legislation. She also supports PanCAN’s research into the connection between diabetes and pancreatic cancer, and PanCAN’s Early Detection Initiative.

Much of her life focuses on pancreatic cancer – except when she’s playing competitive bridge. “It’s the only way I can get away from the disease and turn my brain off!” Kasselman said.

“My devotion to this disease remains as intense as it was when I started the foundation.”

Kasselman is often contacted by others who have been recently diagnosed with the disease, and she always listens and provides support.

Most importantly, she is a beacon of hope.

Kasselman doesn’t focus on the struggles. She celebrates what she has accomplished since her diagnosis and her commitment to Sky Foundation. She also celebrates getting to see her four grandchildren grow up!