Volunteer Goes “Above and Beyond” to Help Other Survivors 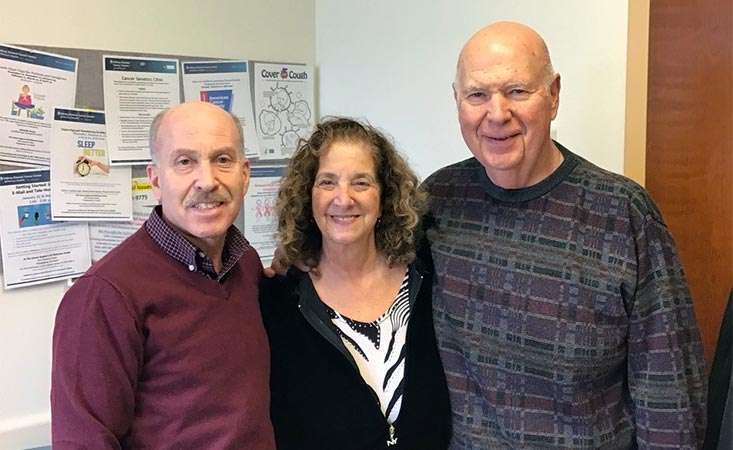 Steven Merlin supported Hedy and Tom Valledolmo by accompanying them to Hedy’s post-surgical and oncology consult.

Steven Merlin is a natural connector.

Perhaps most importantly, he connects with other pancreatic cancer survivors to let them know that they are not alone and that there is hope.

“Steve is like a guardian angel,” said Hedy Valledolmo, who was diagnosed with pancreatic cancer in December 2019. “He gave us all the time in the world and answered any questions I had.” 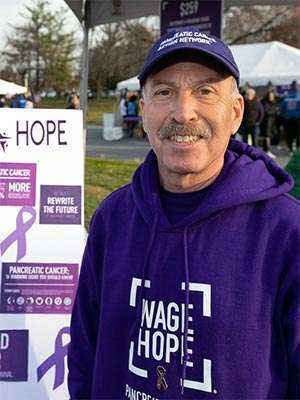 Merlin speaks with other survivors and does outreach to the public to raise awareness of pancreatic cancer signs and symptoms.

Valledolmo’s husband emailed Merlin, and they talked over FaceTime the next day. They connected several times over the weeks that followed – all while Merlin was in Switzerland.

They had never met in person, but when Valledolmo was anxious about post-surgery (adjuvant) chemotherapy, which her oncologist was suggesting she not get, Merlin was back home and offered to go with the couple to see a specialist for a second opinion.

He drove about 50 miles to their home, and the group piled into one car to drive another 50 or so miles to the hospital. “He went above and beyond,” Valledolmo said.

That second opinion – and Merlin’s support when they were getting it – helped Valledolmo decide to go on chemotherapy and feel confident in that choice.

Valledolmo continues to talk to Merlin regularly. “Every time a question comes up, he is always available. Now I don’t do anything without reaching out to Steve.

“He is a very knowledgeable, kind human being who wants to help people who are scared because of this diagnosis.”

Merlin has been more than happy to help.

In his biomedical research career, he developed the ability to make complex science more understandable to a non-scientific audience. Knowing that the Valledolmos were overwhelmed, he saw a way to use that skill to help make the pancreatic cancer journey less intimidating for the couple.

He also saw many similarities between Valledolmo’s case and his own.

Merlin was diagnosed in 2012 with a rare, particularly aggressive form of pancreatic cancer. He had surgery and went on FOLFIRINOX chemotherapy after – both of which he was able to talk to Valledolmo about.

After several years of pancreatic cancer treatment, Merlin went on long-term disability from his research job. But he hasn’t stayed idle.

Instead, he has used his diagnosis, his survival and his voice to help create a better future for pancreatic cancer patients.

“In a way, having developed pancreatic cancer opened up a lot of things for me. It’s given me the opportunity to help other people and give back.”

Merlin is in daily contact with people to try to spread the word about pancreatic cancer symptoms and treatment options. He also volunteers with PanCAN’s Survivor & Caregiver Network, a resource that connects people facing pancreatic cancer with someone who has been in their shoes.

In 2017, Merlin attended National Pancreatic Cancer Advocacy Day, an event that brings advocates from across the country to Washington, D.C., to meet with their members of Congress and urge them to increase federal research funding for the disease. 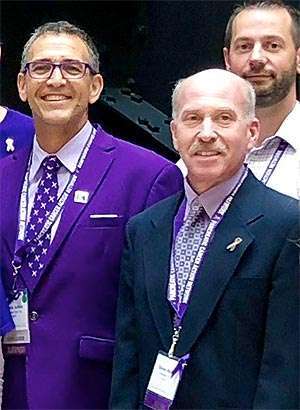 There he met Franco Juricic, a dedicated PanCAN volunteer who had also faced a pancreatic cancer diagnosis.

In late 2018, Juricic reached out to Merlin about a new volunteer leadership role, Outreach Chair, for the New Jersey Affiliate – a group of volunteers dedicated to raising awareness and funds for the cause in their local community.

The role was perfect for Merlin, and he quickly told Juricic he would take it on.

“I liked explaining scientific concepts in easy-to-understand terms, and this position would allow me to conduct awareness programs to educate the public on the importance of early detection and knowing the symptoms.”

Sadly, Juricic passed away from pancreatic cancer in 2019.

“I really lost a good friend,” Merlin said. “I was grateful to have known him for that short period of time.”

Merlin is dedicated to continuing Juricic’s work and honoring his legacy. Merlin continues to serve as the New Jersey Affiliate’s Outreach Chair and is a passionate advocate, always looking for ways in with new members of Congress.

It is important to him that there is progress being made against this disease.

“When I first became aware of pancreatic cancer in 1979, the survival rate was 2.7%. It was so dire back then. When I was diagnosed in 2012, it was 6%. Now it’s 10%. Even though these are small increments, they represent hundreds more people each year who are surviving pancreatic cancer.”

When he was diagnosed, Merlin thought about what he wanted his legacy to be. His answer: “I wanted people to remember me for doing something exceptional despite what I’m going through.”

“Speaking with Steve has been a huge, huge inspiration to me,” Valledolmo said.

She’s still very early in her journey and is just now starting adjuvant chemotherapy. But when she thinks of her future, she wants to pay Merlin’s kindness forward.

“I am very interested in being an advocate down the road because I want to help and inspire others diagnosed with this disease like Steve helped me.”

Connect with the PanCAN community. Contact Patient Central to connect with Survivor & Caregiver Network volunteers, join a virtual PurpleStride in your area or learn about virtual events being hosted by an affiliate near you.

And keep an eye out for more stories about survivors connecting with each other, which we will be sharing later this month!