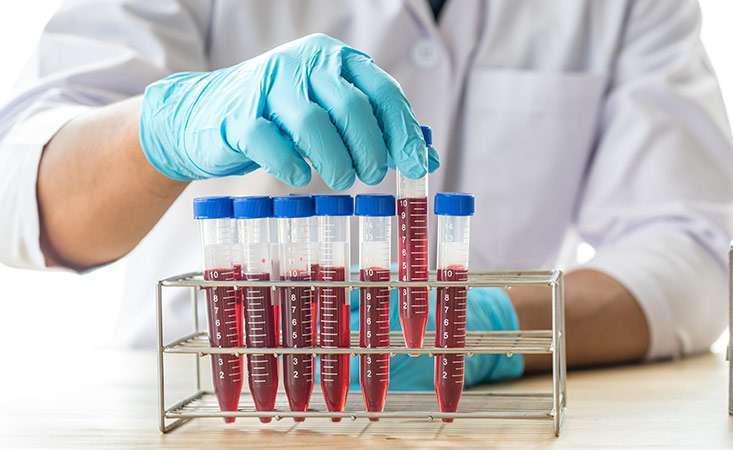 Sooner is better when it comes to detecting and treating cancer. And while there are no standard early detection strategies for pancreatic cancer, researchers, healthcare professionals and patients are working together to change that.

Imaging tests are ways for healthcare professionals to diagnose and monitor cancer as well as determine whether a tumor can be removed by surgery.

Biomarkers are substances in a person’s blood, saliva or other body fluids that can be measured. People with a disease, compared to healthy people, sometimes have unusual levels of certain biomarkers.

Biomarkers can potentially help diagnose and monitor a disease and provide clues about the best treatment options for a patient.

Researchers are looking for biomarkers that would help distinguish a person with undiagnosed pancreatic cancer from an unaffected person. Such a test, which would need to be proven to work with high accuracy in large populations, would likely test a panel of biomarkers, rather than just one.

3. Learning from people at high risk

Those at high risk for pancreatic cancer can play an important role in improving outcomes for current and future patients. They can help researchers and healthcare professionals better understand the disease and how it forms by participating in scientific studies and sharing their health data.

4. Studying the connection between diabetes and pancreatic cancer

Individuals diagnosed with new-onset diabetes later in life are of particular interest to pancreatic cancer researchers.

Studies show that those who developed diabetes after age 50 have a nearly 1 percent chance of being diagnosed with pancreatic cancer within one to three years following their diabetes diagnosis. In these cases, the patients’ diabetes is caused by an undiagnosed pancreatic tumor.

Researchers are working to differentiate which patients with new-onset diabetes are most likely to be diagnosed with pancreatic cancer, offering an opportunity to find and study the disease in its early stages.

Today, more researchers are studying the link between diabetes and pancreatic cancer, and PanCAN has awarded targeted grants encouraging this research. PanCAN is also teaming up with government and other research institutions for key projects to help find pancreatic cancer sooner among this group of patients.