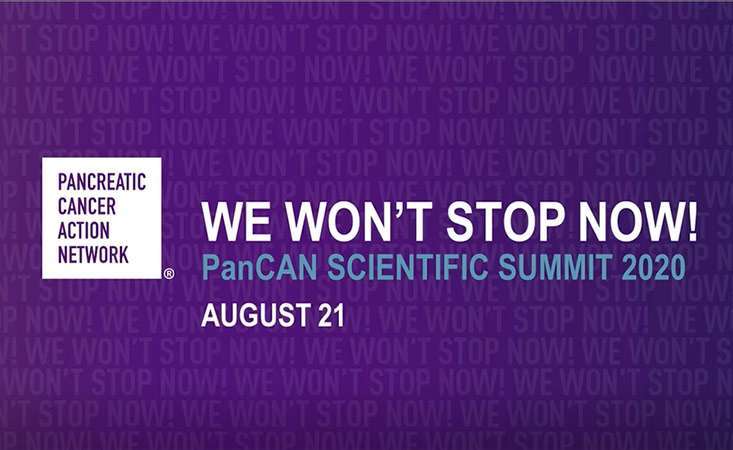 The Pancreatic Cancer Action Network’s (PanCAN) Annual Scientific Summit may have looked different this year, but some things stayed the same.

And a constant reminder of why we were all there – to improve outcomes for today’s pancreatic cancer patients and those who will be diagnosed in the future.

“These individuals make up our Community for Progress – a community dedicated to idea-sharing, mentorship and collaboration to work toward advancing research and helping patients.”

The virtual meeting kicked off with PanCAN’s president and CEO, Julie Fleshman, JD, MBA, outlining all that the PanCAN community accomplished together in the past year, including:

Fleshman also revealed that, despite the global pandemic and widespread financial struggles, PanCAN plans to invest a record $23 million in research this fiscal year.

“We need you!” she emphasized to the audience, reminding everyone of the important role they play in pushing research forward.

Fleshman next introduced our newest group of PanCAN research grant recipients and transitioned to presentations by some recipients of ongoing early-career grants.

“This funding has been instrumental to my career.”

“I’m very appreciative of the funding and professional support.”

“This funding has been absolutely indispensable to my career and my ability to complete this work.”

“Because of this support, I have committed myself to pancreatic cancer research and patients.” 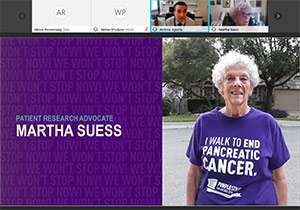 The scientists shared updates on projects ranging from identifying the earliest changes in cells of the pancreas that turn into cancer to exploring novel combinations of treatment types that take advantage of vulnerabilities within the cancer cells.

Additional presentations provided updates on PanCAN’s Early Detection Targeted Grants that were awarded in 2017, which strive to move forward blood-based tests to detect the disease in its earlier, more treatable stages. And, information was shared about PanCAN’s Precision PromiseSM adaptive clinical trial, which is now open to enroll patients at several sites around the country.

Singhi spoke about results from his 2016 PanCAN Translational Research Grant, which funded work toward characterizing pancreatic cysts based on their likelihood of progressing to pancreatic cancer.

Singhi shared that approximately 15% of pancreatic tumors arise from cysts in the pancreas – but that more than six million Americans are thought to have pancreatic cysts. His team is focused on differentiating cysts that are likely to become pancreatic cancer from those that will not cause harm to the patient over time.

Singhi’s team has developed a test known as PancreaSeq – now in its second version – that uses fluid from the cyst to analyze their genetic features.

Version 2 of the PancreaSeq test evaluates 22 genes that provide information on the severity and potential for progression of pancreatic cysts. The test is being used at more than 20 institutions across the U.S.

Singhi ended his talk with, “None of this work would be possible without the generous support from PanCAN – we are truly indebted to PanCAN and its donors.”

Linehan’s presentation focused on work funded through his PanCAN Research Acceleration Network-2 Grant from 2016, funded in memory of Shirley Sadoff.

Linehan’s work has focused on treatment approaches that target the tumor microenvironment (dense tissue that surrounds pancreatic tumors) and block it from shielding pancreatic tumors from an immune attack. 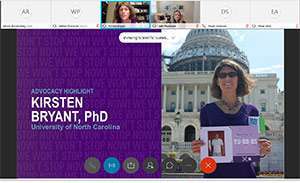 Grantee Kirsten Bryant, PhD, describes to the audience her experiences participating in PanCAN’s advocacy efforts in memory of her dad.

“The tumor microenvironment of pancreatic cancer is unique,” Linehan shared in his remarks. “There are many more cells that make up the microenvironment than there are cancer cells themselves.”

Based on their studies, several clinical trials are underway or in planning stages to test novel combinations of treatments to disrupt the tumor microenvironment and enhance immunotherapy’s effectiveness in pancreatic cancer patients.

In addition to exploring whether the experimental treatment combinations are effective, Linehan and his team aim to compare tumor tissue, bone marrow and other specimens from patients before and during treatment – to learn from every patient in real time whether and how the investigational therapy is working.

The research funding also went toward a forward-looking test to help predict which patients are most likely to respond to certain treatments before they start the therapies.

The test is known as PurIST, which stands for Purity Independent Subtyping of Tumors. PurIST analyzes genetic changes present in samples of tumor tissue to determine the likelihood of the patient’s tumor responding to the combination chemotherapy FOLFIRINOX.

“There are now five investigator-initiated clinical trials that came out of our Research Acceleration Network-2 Grant from PanCAN,” Linehan said. “This transformative funding has also gone toward tools to understand treatment response and resistance.”

Scattered throughout the virtual Scientific Summit were vignettes from various members of the PanCAN community – an early-career grant recipient describing how much the funding has meant to her and her lab; a grantee who lost her father to the disease, explaining the power of participating in government advocacy; donors, one of whom a survivor, speaking about the impact of their philanthropy; and another survivor sharing the importance of participating in PurpleStride events – virtually for now.

“Even though we wish we could all be together, the energy, enthusiasm and sense of urgency were still apparent throughout our virtual Annual Scientific Summit,” Manross said.

“We are proud to introduce our newest grant recipients into this Community for Progress and to continue to all work together to improve pancreatic cancer patient outcomes.”

Donate today so PanCAN can continue to fund groundbreaking research.

If you are an early-career pancreatic cancer researcher, learn more about PanCAN Career Development Awards and spread the word to your trainees and colleagues.