2021 Year in Review: Progress in Research 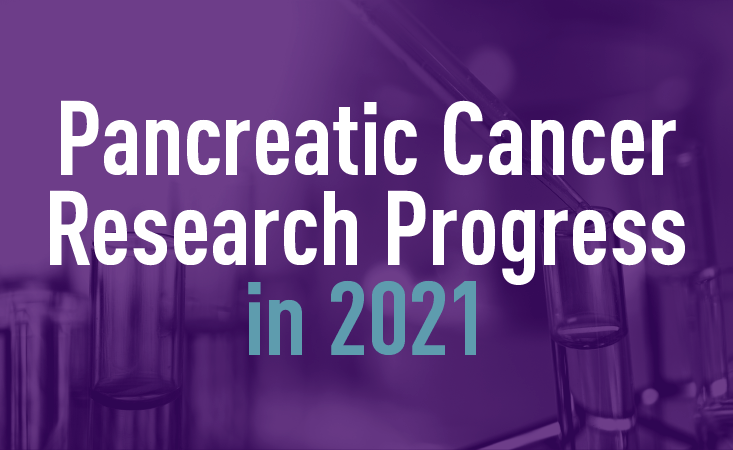 Every one of PanCAN’s scientific and clinical initiatives – from our Early Detection Initiative and Precision PromiseSM adaptive clinical trial platform to our Research Grants Program and Patient Registry – is driven by evidence-based research and an aim to generate new data to advance the field and help pancreatic cancer patients.

None of this work would be possible without the trust and generosity of PanCAN’s donors and supporters. Despite a year of fear and uncertainty as the global pandemic continues, PanCAN is investing a record $28 million in research toward understanding, detecting and treating pancreatic cancer.

PanCAN announced our Early Detection Initiative in April 2021. Factors like the lack of a standard early detection test, combined with the disease’s vague symptoms and the infrequency of pancreatic cancer diagnoses, lead to the majority of cases being diagnosed once the disease has spread beyond the pancreas, resulting in fewer and less effective treatment options.

Diagnosing more patients when their disease is confined to the pancreas and potentially surgically removable requires the identification of people at highest risk and reliable tests to detect early indication of the disease. PanCAN’s Early Detection Initiative builds upon research showing that a subset of patients with pancreatic cancer were diagnosed with diabetes prior to their cancer diagnosis. Evidence suggests that a tumor forming in the pancreas can cause diabetes – leading to diabetes being considered a potential symptom of pancreatic cancer. This information is the foundation for the Early Detection Initiative, a randomized controlled trial designed to evaluate if imaging at the time of new-onset diabetes results in earlier detection of pancreatic cancer. In addition to imaging tests, blood samples are also collected for future analysis. The overall goal of this study, which began enrolling patients this year, is to develop an early detection strategy for this disease.

This approach was made possible by PanCAN Chief Science Officer Lynn Matrisian, PhD, MBA, carefully watching the biomedical literature focused on the relationship between diabetes and pancreatic cancer. Much of the research into this topic was led by Suresh Chari, MD, member of PanCAN’s Scientific and Medical Advisory Board and principal investigator of the Early Detection Initiative study. The dedication and passion of leaders like PanCAN Board of Directors member Barbara Kenner, PhD, has also been critical.

In addition to studying patients with diabetes, other early detection efforts focus on individuals at high risk due to genetic factors or family history. PanCAN’s campaign for Pancreatic Cancer Awareness Month in November focused on the message, “Talk. Test. Take Control.” This included an emphasis on patients getting tumor tissue biomarker testing to determine the best treatment options for them and also genetic testing for inherited mutations, which can inform treatment options as well as provide information to their family members of their risk. Family members of patients who’ve had pancreatic cancer are also encouraged to speak with a genetic counselor or doctor.

New in 2021, two blood tests are now commercially available that may be able to detect pancreatic cancer before it’s otherwise diagnosed. Available when ordered by healthcare professionals for individuals at elevated risk, GRAIL’s GalleriTM test can detect more than 50 types of cancer, while Immunovia, Inc.’s IMMray PanCan-d® test is the first-ever blood test specific for detecting pancreatic cancer. Researchers are continuing to study these blood tests and discover additional biomarkers to incorporate into early detection efforts moving forward.

Highlighting the importance of testing, a study associated with PanCAN’s Know Your Tumor® precision medicine service was also published this year, focusing on patients whose tumors have alterations in a gene called RAF. Compiling data from Know Your Tumor and testing through other institutions, it was discovered that about 2.2% of patients with pancreatic cancer have RAF alterations in their tumors. And several targeted therapies were shown to be effective in patients with that tumor biology.

Whereas RAF alterations occur most frequently in pancreatic tumors that have wild type, or normal, versions of a gene called KRAS, KRAS mutations are extremely common in pancreatic cancer. In fact, around 95% of pancreatic cancer cases have a KRAS mutation. The KRAS protein has historically been deemed “undruggable,” but this year for the first time, a drug targeting mutant KRAS gained FDA approval. The drug is specific to a mutation known as G12C on the KRAS protein, which only occurs in about 1% of pancreatic tumors. However, clinical trials are ongoing testing additional targeted therapies against the mutations in KRAS that are more common for pancreatic cancer patients.

Looking back on research grants awarded over the years, we conducted a rigorous evaluation of the impact of the program this year. We found that researchers who received grants between 2003 and 2019 went on to earn an additional $11.50 in pancreatic cancer research funding for every $1 invested by PanCAN.

Current and past PanCAN grantees came together virtually along with staff, members of our Scientific and Medical Advisory Board, industry partners and other special guests for our Annual Scientific Summit in October. The Summit featured updates on PanCAN’s major initiatives, hearing from grantees on progress made through their research awards and bringing in voices of Patient Research Advocates, whose lived experiences help shape research directions and project aims. Some of the highlights from the meeting were shared with our larger community through a well-received webinar titled, “How You Are Changing the Future with Research.”

PanCAN also contributed to the biomedical literature this year by revisiting past projections and reporting that deaths from pancreatic cancer are predicted to overcome those from colorectal cancer by 2030, bringing pancreatic cancer to the second leading cause of cancer-related deaths in the U.S., behind only lung cancer. This can serve as a wakeup call to the scientific and clinical community to prioritize research efforts aimed at improving patient outcomes and reducing deaths caused by the disease.

In order to fulfill our vision of creating a world in which all patients with pancreatic cancer will thrive, PanCAN will continue to invest in transformative scientific and clinical initiatives and funding external research. Because without research, there will be no progress.

And without you, there would be no PanCAN. Thank you for your commitment.

Give an end-of-year gift today to ensure PanCAN can continue to invest in potentially life-saving research efforts.
Share  Tweet
More on:
You may also be interested in...